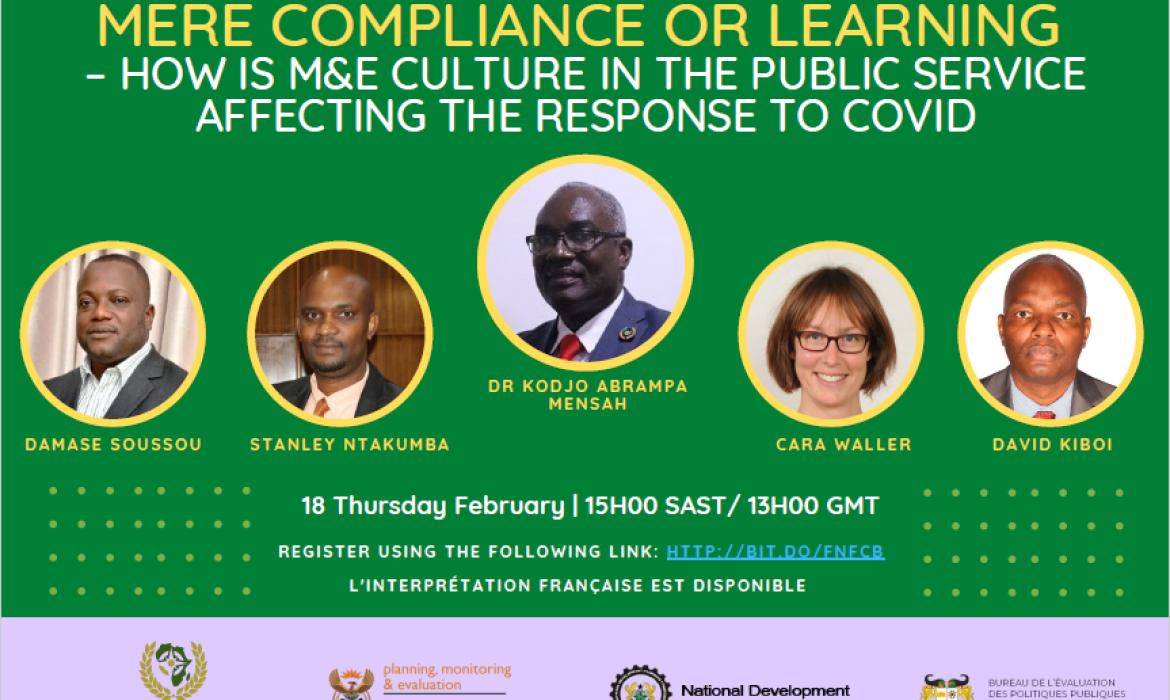 This chapter builds on research on the performance monitoring and evaluation (M&E) culture in Benin, Uganda and South Africa conducted through the Twende Mbele African M&E partnership, which is presented here to provide a context for the cases in the book.

The research was conducted on approximately five national departments per country and 368 managers were interviewed: 149 from Benin, 127 from South Africa, and 92 from Uganda. We see a mixed picture and many similarities in the three countries.

Overall, all three have significant planning and monitoring systems and an established evaluation system. Around half of managers are seen to be using evidence from M&E, with evaluations used particularly in an ex-post role rather than during the life of interventions. The effect of each country’s national evaluation system is recognised. However, there is also evidence of negative behaviour, using reports to conceal information, not interrogating the cause of failure. The survey is itself a baseline for Twende Mbele and the trends in these figures will be interesting. 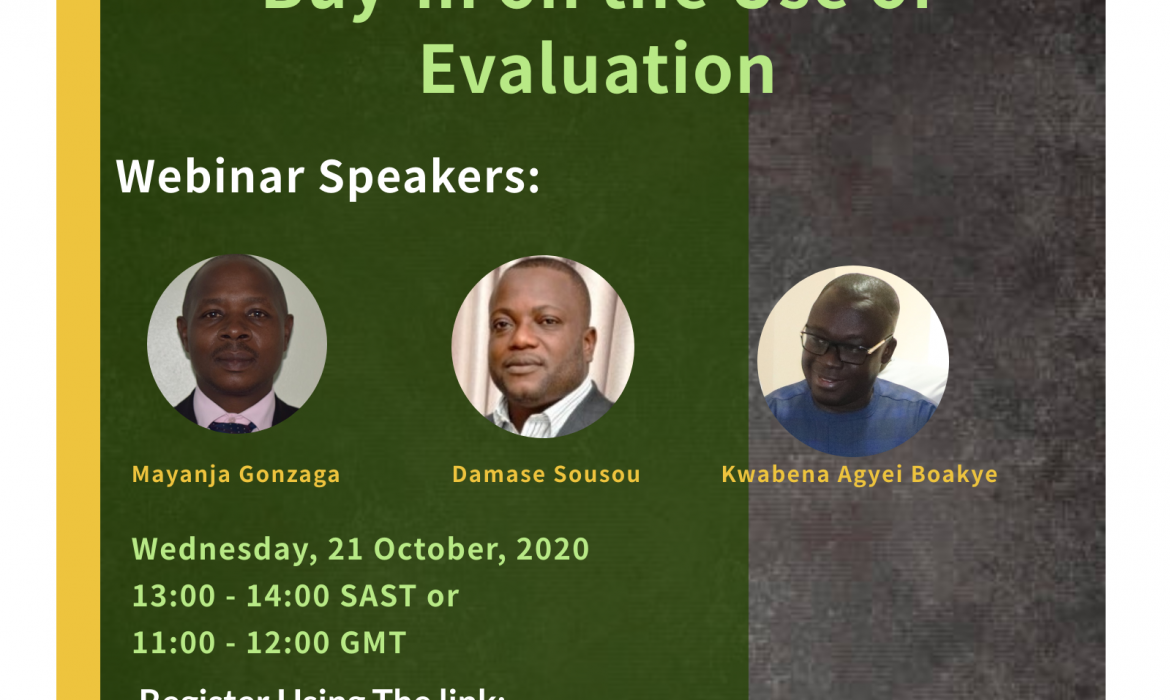 Building a robust M&E System: Getting political buy-in on the use of evaluation (Webinar) 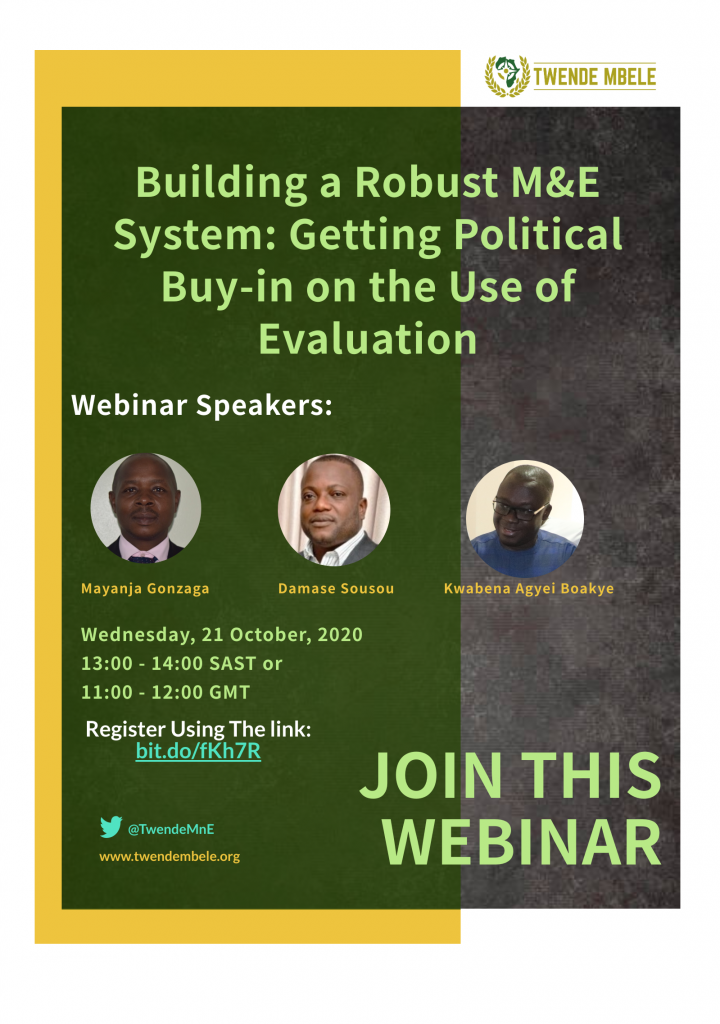 Building a robust M&E System: Getting political buy-in on the use of evaluation (Webinar)

Monitoring and evaluation (M&E) are at the center of sound governance arrangements. They are necessary for the achievement of evidence-based policy making, budget decisions, management, and accountability. There is no “best” model of what a government M&E system should look like. Much depends on which of the several potential uses of M&E information constitute the main reasons for building such a system.

But in order for all of this to happen, political buy-in has to be sought and obtained. Demand from governments is crucial for the utilization of M&E information and for the ongoing funding of M&E activities. Thus, it is necessary to secure the buy-in of the key stakeholders such as government ministers or finance ministries if substantive effort is to be put into creating, strengthening, or funding M&E functions. This webinar will explore how political buy-in for M&E looks in different country contexts. 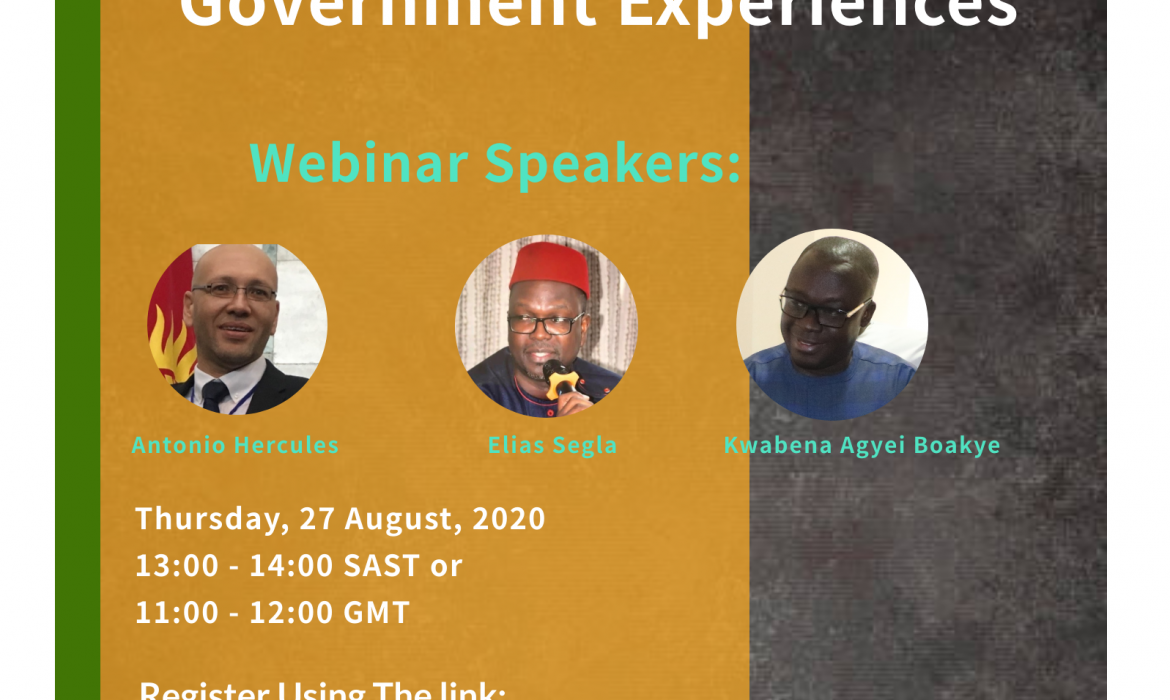 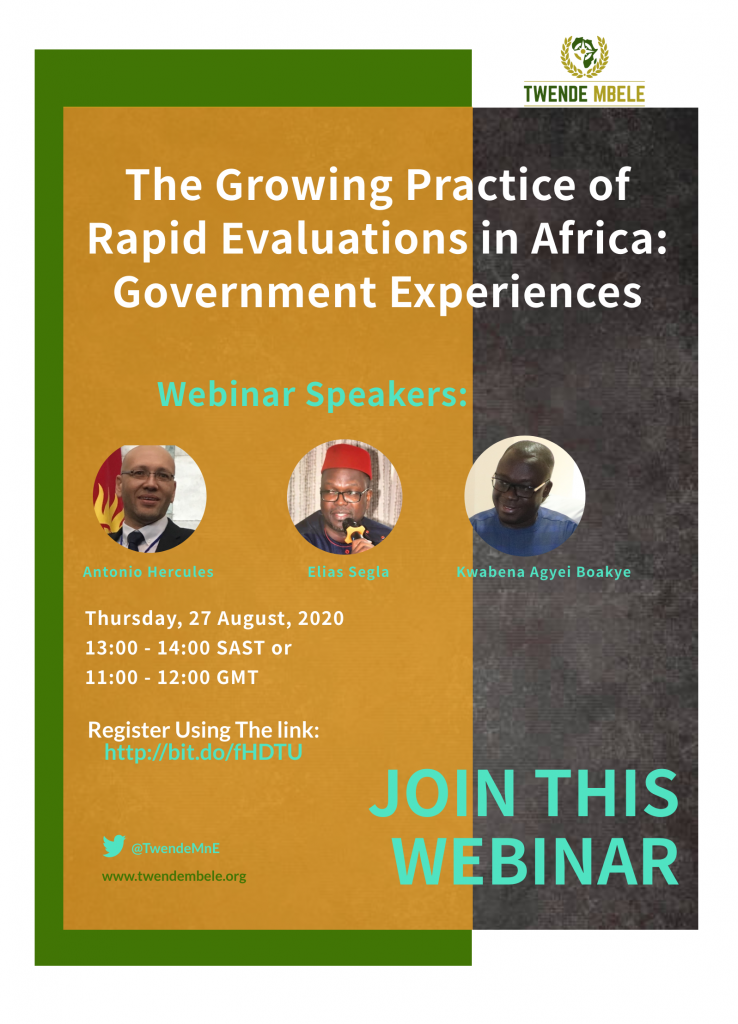 Rapid evaluations are intended to reduce the costs of evaluation projects and the time they take (DPME, 2020). These are evaluations which can produce a result that can feed into policy and practice quickly, but yet is sufficiently robust to provide good guidance for decision-making. They address the need to quickly assess policy/programme/strategy/function delivery, and establish the main performance data, with main recommendations for improvements (Hercules, 2019). And they also help to understand and learn from what works, what doesn’t, when and for whom. But are they really the panacea government thinks they are?

In the last couple of years, with the advancement of methods to doing Rapid Evaluations, many African countries have taken up the opportunities to conduct this type of evaluation for quicker results. This webinar will highlights some of the efforts by these governments.

Click the link below to register for this webinar: 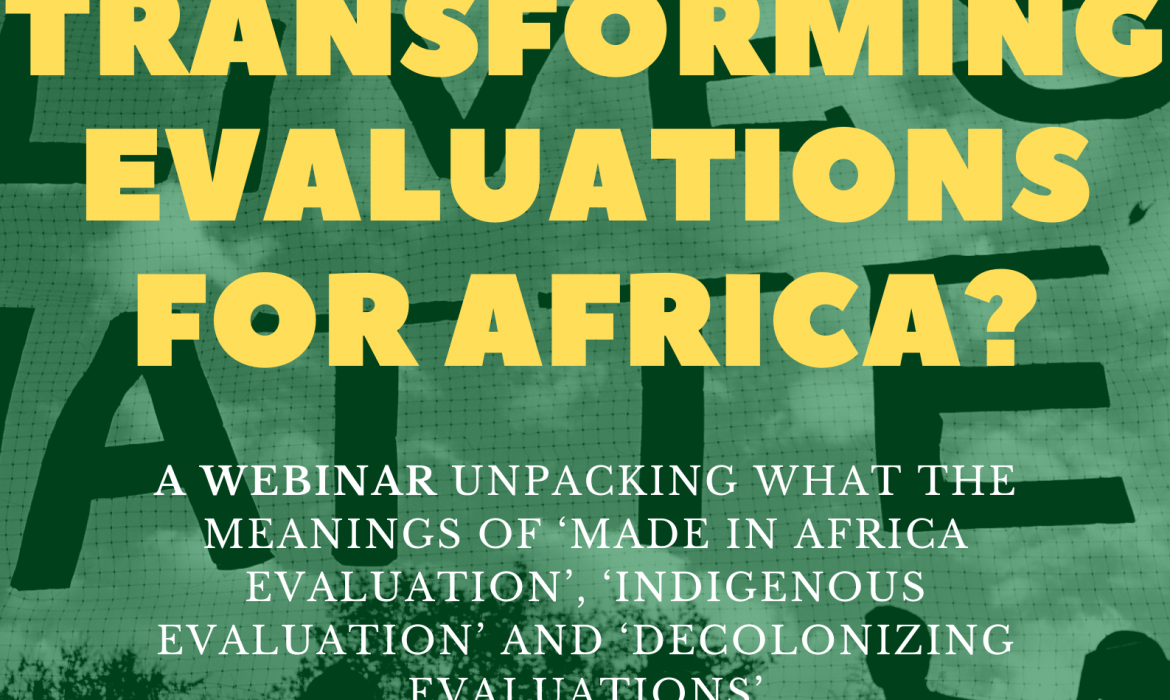 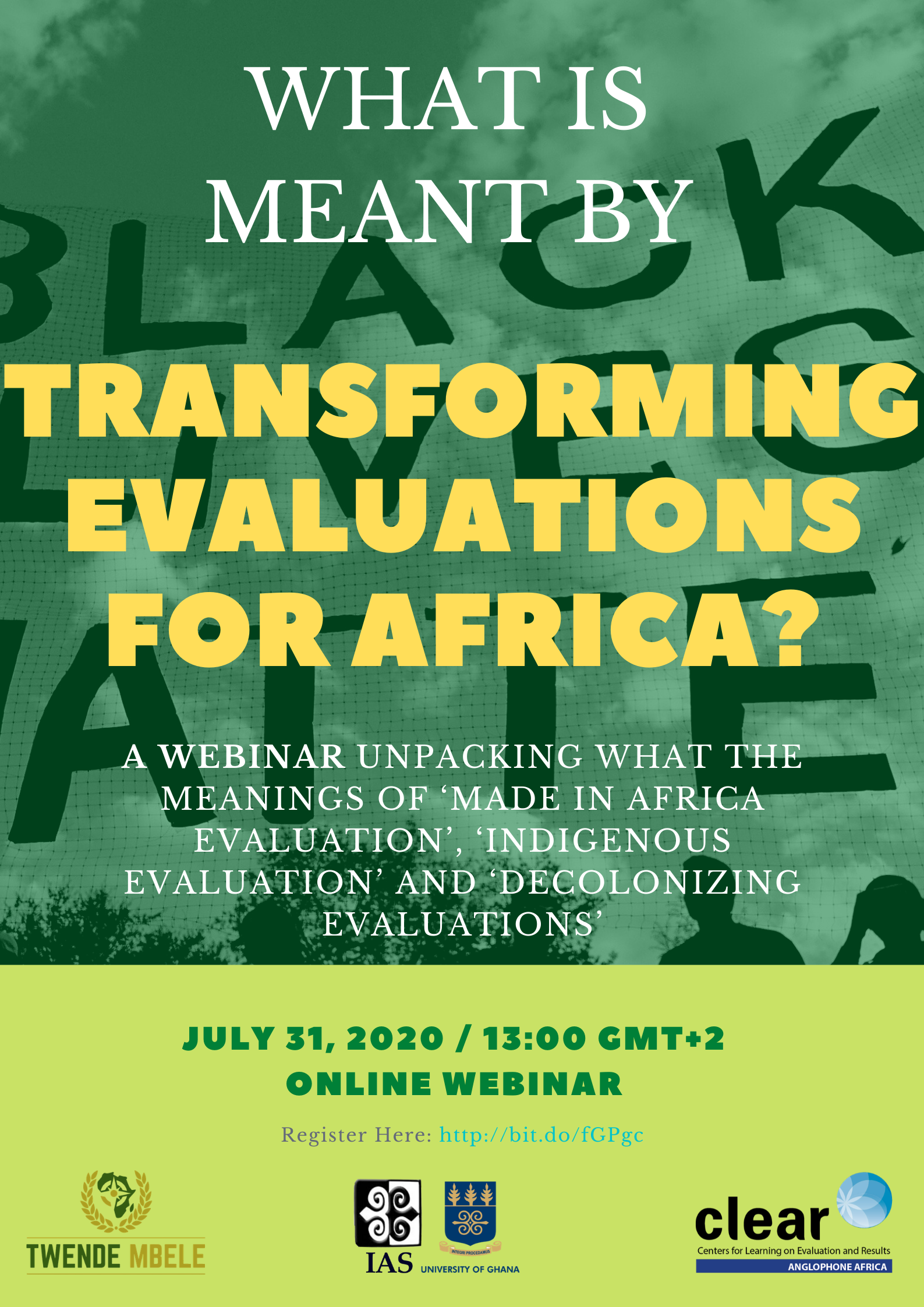 The call for transformation and decolonization is nothing new in African vocabulary, there’s been calls for decolonization education and healthcare sectors, and the transformation of political and economic participation in terms of more women being represented. The evaluation development space has not been exempted from these calls. Over the years, there’s been growing calls for the transformation of the evaluation landscape with more female representation and the use of more black evaluators in the space. Phrases such as: Made In Africa Evaluation; Indigenous Evaluation; and Decolonizing Evaluations have been touted more and more frequency.

Do they all mean the same thing? If not, then what do they mean? This webinar titled ‘Transforming Evaluations for Africa’ will look to unpack the meanings of phrases such as ‘Made In Africa Evaluation’, ‘Indigenous Evaluation’ and ‘Decolonizing Evaluations’.

Click the following link to register for this webinar: http://bit.do/fGPgc 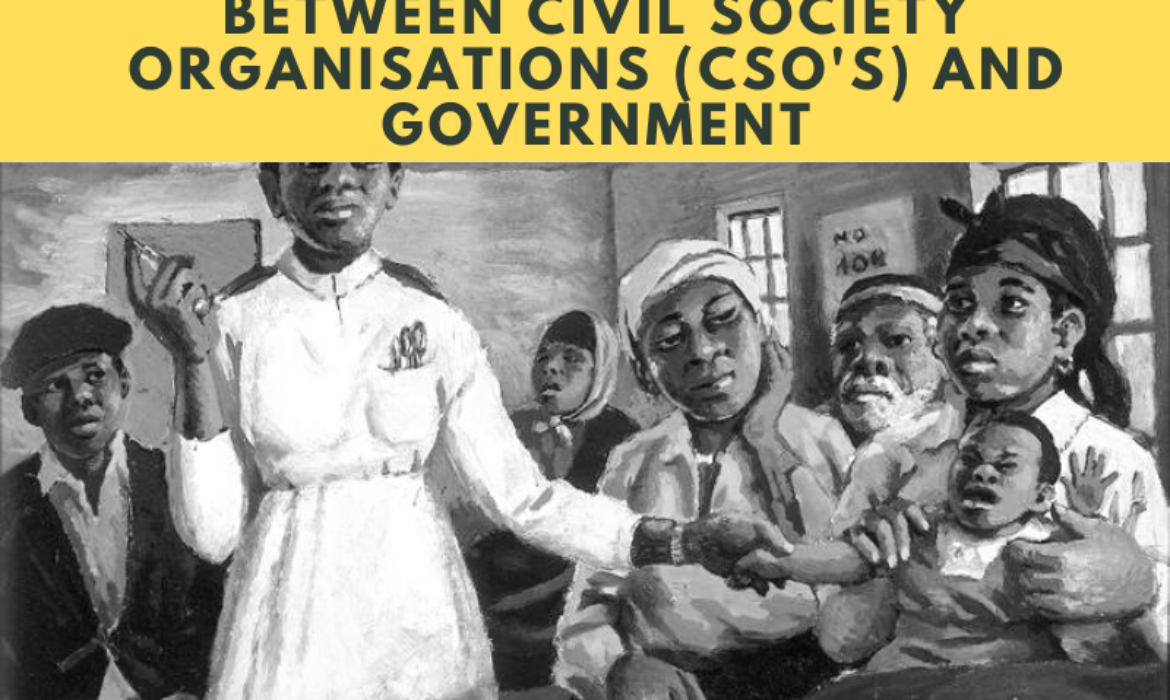 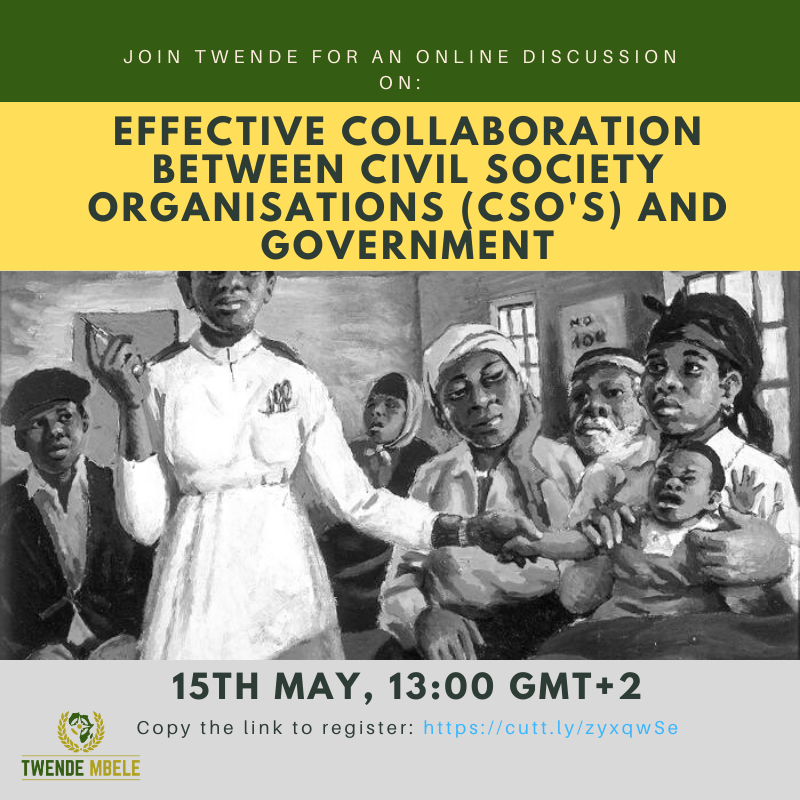 Join us for a webinar titled, “Effective Collaboration Between Civil Society Organisations (CSOs) and Government”. This webinar will bring together Government Officials, M&E practitioners, researchers and experts who work in/with Civil Society Organizations (CSOs). It will focus on some of the work done by Twende Mbele through its partnership with (CLEAR-AA), and the work done by other organizations and institutions in various sectors across the African Continent.

This webinar will tap into the experiences of our partners working in/with CSOs in countries such as Ghana, South Africa and others, particularly on areas for enhanced collaboration between CSO’s and government in the national monitoring and evaluation systems (NMES), for the purposes of improving accountability and government performance.

Use the following link to register for the webinar: https://cutt.ly/zyxqwSe